ZOOM.11 has been concluded!

Between 23rd and 25th March 2017, Pionirski dom hosted the 11th ZOOM International Film Festival for children and youth. After a successful decade at home, the festival finally expanded across borders. The response was breathtaking. In addition to 87 local films, our jury received 413 international entries from literally across the globe. We got 50 from the US, 35 from India, 30 sent by young Iranians and Spaniards, 23 from Greece, 22 from Russia and various films from Brazil, Bangladesh, China, Indonesia, Kenya, Syria and others. Over 200 kids participated in film workshops and watch screenings of the best ZOOM.11 films.

Selection was made by Rok Govednik, director and program leader of VIZO, a film and filmmaking institute. 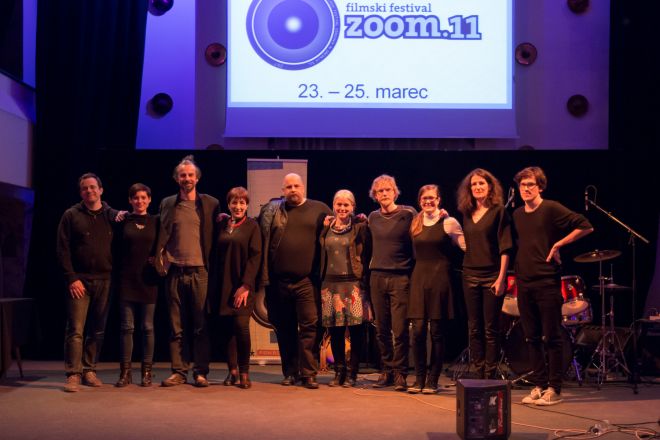 EXPLANATION OF THE JURY'S VERDICT FOR WINNING ENTRIES

What is film, basically, if not a game of light and darkness? The projector's beam lights up the screen and moving figures come to life before us. Mrak delves to the core of the filming apparatus: it reminds us that without people, without moving bodies, a film is nothing, an empty void. It reminds us that that the screen starts out dark, blank, and that only the artist can fill this space with life and light. That is why Mrak deserves the Golden Clapperboard.

Documentaries form the minority of ZOOM's lineup, but Ilirjana Memaj's film proves that they must be taken dead seriously. The Cost of Applause takes us to the backstage of ballet performances, into the world of endless training and unbearable répétiteurs. The director observes this world in a sober, stealthy manner, from a distance, without interruptions or unnecessary comments. She is merely watching, looking, cleverly leaving the final verdict to the viewer – a documentary in the brightest sense of the word. The Cost of Applause deserves a special jury mention and honorable round of applause.

Watch The cost of applause here.

I Don’t Want to Live Anywhere Else (Anton Forsdik; Sweden)

Ole, the main and only character of Anton Forsdik's film, is a twelve year-old. And a schizophrenic. The Swedish I Don’t Want to Live Anywhere Else fearlessly manages to take on this complex and mature topic in just under two minutes. Forsdik takes a gentle and sensitive, yet cold and brutish approach. This title deserves a special jury mention for its bravery, maturity and aesthetic perfectedness.

Watch I don't want to live anywhere else here.

Who Is in Charge Here? (group work, Studio Da; Russia)

Primary school entries dominated the animation department this year, but the genre is also strong in secondary schools. Who Is in Charge Here? by Studio Da from St. Petersburg, Russia proves just that. The film is distinguished by a great mastery of stop motion, but it was the combination of its fearless message and the aesthetic execution that won the jury over. The creators state their political commentary loudly and proudly, but they do it with a subtle, precise feeling for film language and film expression. These are just some of the qualities that won Who Is in Charge Here? the Golden Clapperboard.

Watch Who is in charge? here.

If Journey was shown in theaters or on television, no one would probably notice that the author is a 15 year-old. Australian Radheya Jagatheva created an eight-minute computer animation that could go toe to toe with Hollywood's finest. It is a techincal and storytelling masterpiece, and to top it all off, Jegatheva also produced the film's soundtrack – that is why Journey deserves a highly honorable mention.

Director Partho Gupte should be stuying for his finals, but alas, there is a pigeon staying on his windowsill. Instead of picking up a book, he picks up a camera. A few weeks pass, then a few months, and little Gary the chick hatches from his egg. Pigeonhood is a coming of age story, but not that of a human. This is Gary's story: a story that the filmmaker brings close to us by way of skillful editing and an intimate first-person narrative. This earns Pigeonhood an honorable mention.